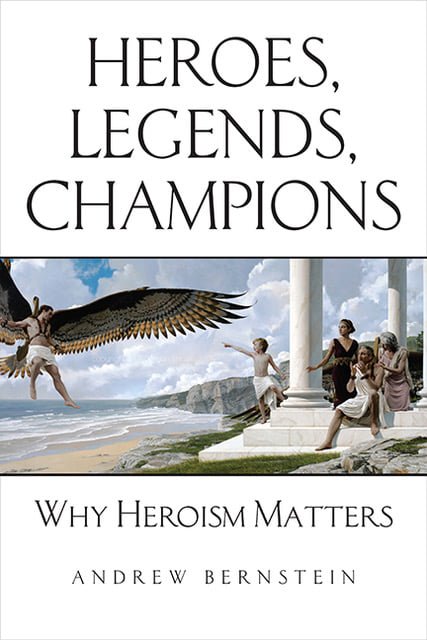 This is not a self-help book. Its purpose is to not to show us how to apply the lessons of a hero’s life in our own. Rather, it is a theoretical book, explaining what heroes are and why mankind needs them. Before we can emulate heroes, we must properly identify them, we must understand who and what they are….And what they are not. This is a matter of life and death. Some persons, for example, at various times have considered as heroes Adolf Hitler, Josef Stalin, and Osama bin Laden. If we are to promote human life, it is necessary for us to clearly understand that and why mass murderers are definitively excluded from the echelon of heroes.

Chapters One, Two, and Three focus on the nature and definition of a hero, and provide a method for distinguishing a hero from non-heroes.

Chapter Four raises the question of whether, under appropriate circumstances, everyman and everywoman can rise to heroic heights–and answers in the affirmative.

The two appendices validate philosophic principles that underlie the theory of heroes elucidated here: That human life is the standard of moral value and that human beings possess free will.

This book does not purport to be an exhaustive analysis of a hero’s nature. Presumably, there is more to be said. But it is a provocative first step toward understanding the nature of heroes, one that will hopefully spark a lively 21st century debate of this important subject.

Aristotle, Montessori, Carver, Cyrano, Earhart, Shackleton, Shane, and many more. Bernstein passionately demonstrates how heroes exert every ounce of their intellectual, physical, and moral strength to surmount obstacles as they tirelessly promote human life. The end result for the heroes in and readers of this book is a resounding victory!

The world needs heroes, but even more so, it needs to understand heroes and heroism. This new work from Andrew Bernstein clearly elucidates the nature of heroes, the crucial role they play in human life, and the philosophic underpinnings of why heroism is, in essence, a life-promoting, values-achieving phenomenon.”

Bernstein demonstrates that heroism is about achieving values in the face of dangerous impediments or social prejudices, challenging the popular myth that self-sacrifice is the essence of heroism. Bernstein inspires with stories of real and fictional heroes while teaching us a profound philosophical truth – that heroes demonstrate the efficacy of the good and the impotence of evil. If you are not already a hero worshiper, you will be by the end of this vitally needed book.

Praise for ‘the average guy’ or ‘the common man’ is usually well-intentioned but it misses a larger point: It’s the heroic, not the ordinary, to whom civilization owes the greater credit. As Andrew Bernstein eloquently explains, those who stand out from the crowd because of their inventiveness, entrepreneurship, courage, and character are our real heroes. They deserve so much more appreciation and emulation than they typically get.

Andrew Bernstein’s book Heroes, Legends, Champions: Why Heroism Matters offers a clear, detailed, and long-overdue answer to what makes a hero; can everyman and everywoman be heroes; do morally flawed heroes exist; is heroism a choice; and so much more. With powerful logic and eloquence, Dr. Bernstein defends the necessity of heroism for humanity. Despite the cynical and pessimistic views of human nature so prevalent in modern culture, the need for heroes has been profoundly felt since the dawn of civilization and is still alive today—one need only look at youngsters’ fascination with the Avengers film series. Andrew Bernstein’s philosophical justification of heroism will hopefully go a long way to neutralize the damage caused by decades of intellectual snobbery and moral relativism and to affirm the inherently human quest for “dauntless pursuit of significant life-advancing goals.”

Giving readers the benefit of groundbreaking insights on the subject, Andrew Bernstein presents an objective definition of what it is to be a hero, and discusses a proper concept of heroism, illustrating his thoughts with an array of examples from both real life and fiction. Further, he shows why flaws or imperfections do not necessarily preclude one from being a hero, and in the end, he inspires all of us to become heroes in our own lives.

Inviting and inspiring on so many levels! Dr. Bernstein’s book is a sumptuous celebration of heroic individuals from real life (e.g., Thomas Edison, Maria Montessori, Frederick Douglas, Ernest Shackleton, George Washington Carver, Thomas Jefferson, Benjamin Franklin, Madame C.J. Walker, nee Sarah Breedlove ) and from literature (Shane, Cyrano, Odysseus). With such examples, he explores what makes a person heroic and what soul-fueling role they can play in our personal lives. Such heroes inspire us to set and pursue our personal goals, strengthen our courage to overcome difficulties, and bring out the best within ourselves, not out of duty, but out of a passion for our own lives and happiness.

Co-Author, The Selfish Path to Romance: How to Love With Passion and Reason

Professor Bernstein has crowned his majestic body of work with another dazzling gem! What makes a hero? Why are they crucially important? Illustrated through a number of moving examples, a philosopher of both powerful logical acuity and fluid accessibility answers these questions as they have never been answered before. If heroism is indeed the dauntless pursuit of life-enhancing values, then this is a work of heroic dimensions.

“This is a clear, thought-provoking study that will reignite the quest of realizing the best in oneself.”

In this theoretical book,  Andrew Bernstein makes an original contribution to our understanding of heroes and heroism. He offers a rational cognitive approach to determine the nature of a hero, to develop a definition of hero, and to distinguish a hero from non-heroes. He goes on to demonstrate that heroes are courageous individuals of great ability who persevere to perform value-laden actions that promote human flourishing; to explain how it is possible for grand achievers to have moral flaws; to show the way in which everyman and everywoman can (in the right context) rise to epic heights; to explain the nature, causes, and errors of the modern anti-hero mentality, and to discuss the the life-giving importance and benefits of hero worship.

Edward W. Younkins, Ph.D.,  is professor of accountancy and executive director of the Institute for the Study of Capitalism and Morality at Wheeling University

I applaud Andrew Bernstein’s book, Heroes, Legends, and Champions: Why Heroism Matters.  We live in a time when statues are being torn down, names are being removed from buildings, and history is being “corrected.”  This book challenges the PC culture without denying that good men and women are often very flawed people.  Our culture is thirsting for a book like this.  It provides insights into the human person, the good, the bad, and everything in between.  If heroism is in need of a hero, it has found one in Andrew Bernstein.

So much confusion surrounds the concept of heroism in our culture and in our world, that it is no wonder we often feel like there are few “true heroes” or that the focus is mainly on their flaws, whether real or imagined.  With this thoughtful and thought-provoking book, Dr. Andrew Bernstein provides clarity.  While exploring what a hero is—and isn’t—he reveals why heroes are so vital to our human existence, indeed, to our souls.  Unveiling the benevolent and life affirming qualities that uniquely distinguish heroic individuals, he guides us to the reasons that underlie the reverence and inspiration we feel towards them, allowing readers to more fully appreciate the heroes’ gifts to humankind at large and to us as individuals.

“This is the book Andrew Bernstein has been working toward for his whole career. Anyone who has read his previous books or heard him speak knows his reverence for the great men and women whose achievements carry mankind forward. Building his case inductively, from many inspiring examples of fictional and real-life heroes, he identifies the common characteristics of a hero, shows that every man has the potential for heroic action–and most important, seeks to rescue the concept of the hero from the morality of sacrifice.”

Author, Who Is John Galt, Anyway?

“Dr. Bernstein provides an original, convincing account of a rare and inspiring phenomenon: heroism. By logic, ethics, history, and the arts, he demonstrates that the essence of heroism isn’t bleeding-heart self-sacrifice but the self-interest of truly courageous individuals who rationally think, act, and achieve values in the face of intense, near-insurmountable opposition. Truly heroic people don’t surrender their values at the expense of life and limb, nor try to ameliorate suffering for its own sake; it’s not mainly first responders but prime movers who foster human life. Dr. Bernstein wants us to be inspired not by sacrificial but selfish heroism, since the former is a contradiction in terms and the latter a profound achievement. His great thesis conveys the inherent, life-affirming humanitarianism of egoism, while providing an antidote to the pandemic of victimhood which altruism has spawned.”   Richard Salsman, Ph.D.,  Assistant Professor, Program in Philosophy, Politics, and Economics at Duke University

“Andrew Bernstein has written an inspiring and insightful book on a topic of great interest to us today. Heroes and heroism are ubiquitous, from the smallest acts of courage to the most grandiose of good deeds. And yet the nature of this common phenomenon is as little understood as it is omnipresent. Bernstein asks us to consider what a hero is. We have an inbuilt need for heroes, and by placing the hero once more at the centre of our reflections, Bernstein inspires us to appeal to our better, nobler angels.”

“Replete with history, philosophy and literature, Andrew Bernstein’s Heroes is surprising and fresh. This slender, inspired volume will animate ambitious readers to find the hero within themselves.”