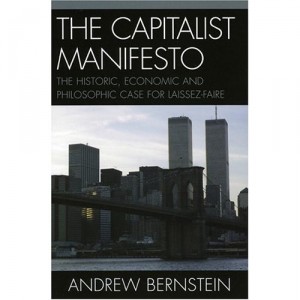 The Capitalist Manifesto: The Historic, Economic and Philosophic Case for Laissez-Faire defends capitalism as the world’s most moral and practical social system. This book is written for the rational mind, whether the reader is a professional intellectual or an intelligent layman. It makes the case for individual rights and freedom in terms intelligible to all rational men.
REVIEWS

For Professor Bernstein, there are no limits to what man can achieve. This book unabashedly supports capitalism—the system of individual rights, private property, and pursuit of profit. Every businessman who has earned profit, and the millions of customers who have benefited from business productivity should read this epic to appreciate capitalism’s glorious accomplishments that we take for granted. (Mark S. Rothstein )

The Capitalist Manifesto is an immensely provocative work that should be read from the halls of academia to the streets of the Middle East. Mr. Bernstein’s arguments pack the intellectual firepower to blast socialism back to the Stone Age. This rich book is a triumph in the crusade for liberty and individual rights. (Jonathan Hoenig )

This monumental work is a tribute to greatness—the exalted men of the mind who create a world of wealth and prosperity, and the great social system of liberty and individual rights that liberates a nation’s mind power. Everyone should read this fascinating book for a clear understanding of capitalism—the system that has doubled our life span, created vast wealth, and generated even vaster opportunities. (Carl B. Barney )

The Capitalist Manifesto is the most sophisticated, the most philosophical, indeed, the most brilliant defense of capitalism published in a generation. Bernstein has done what no conservative or libertarian proponent of capitalism has even dared try: to defend it on moral grounds. This book will revolutionize American culture if read by every college student. All in all, a remarkable achievement. (C. Bradley Thompson, Ph.D. )

Although this book is written for the educated generalist or layperson and the college student, it should be read by everyone—especially by journalists and politicians. Hopefully, it will be adopted as a textbook both here and abroad with foreign editions and translations. Bernstein’s seminal work is a triumph in the crusade for freedom and individual rights. We certainly need more books like this. (Ed Younkins )

In succinctly presenting the historical-economic facts of 19th century capitalism, Professor Bernstein has performed an act of profound justice. While ably recounting how capitalism became the world’s most practical social system, he also explains precisely why this was so: because it was the world’s only supremely moral system. (Richard M. Salsman )

Order the The Capitalist Manifesto: The Historic, Economic and Philosophic Case for Laissez-Faire from Amazon.